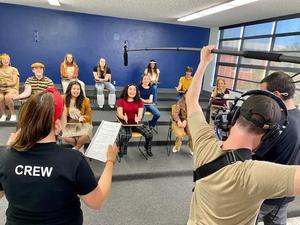 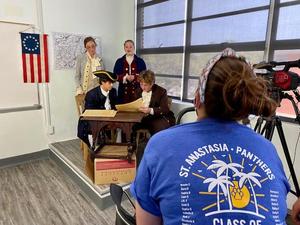 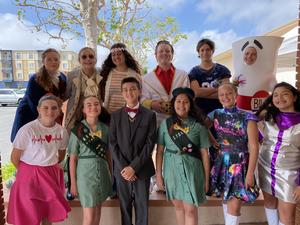 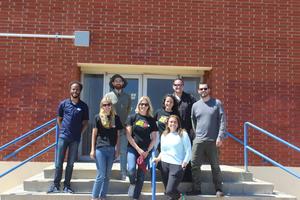 We can't wait to premiere our show for St. Anastasia families on Saturday, June 5th at our on-site Movie Night. We will also stream Schoolhouse Rock, Live! on Sunday, June 6th at 2:00 PM, PST.

Check it out on Facebook @StAsWestchester
St. Anastasia Catholic School has a reputation of being "the Catholic school" for performing arts in the South Bay region. Each year our musicals amaze and delight hundreds of audience members at the El Segundo Performing Arts Center as they celebrate the incredible talent of our students. We've produced Frozen Jr., The Sound of Music, Oklahoma!, and Shrek, to name a few, and the musical is a highlight of the school year. This year, with ever changing pandemic restrictions and distance learning, we worried that a musical may not be possible, but with some creative thinking, we've been able to produce a musical extravaganza like St. A's has never seen before!
Introducing, Schoolhouse Rock, Live! We took the classic children's cartoons and staged them for filming! Thanks to generous contributions from the Vadakin Arts Endowment and the Hannon Foundation, we were able to produce a film for the St. Anastasia community to enjoy. In order to maintain COVID cohort restrictions, our cast was limited to the 8th grade class, which allowed us to offer an extracurricular activity to the Class of 2021. In January, students sent in audition tapes and attended rehearsals over Zoom throughout February. While the cast members weren't initially enthused to be spending more time on Zoom, they ended up bonding through their screens and were engaging in the creative process from their homes all over Westchester! By March we were able to rehearse together outside and learn the choreography in-person, which is when the magic of creating a show really began.
Our production would not have been possible without a location to film and St. Bernard Catholic High School in Playa Del Ray graciously allowed us to film on-site for four days at the end of April. 8th graders worked as crew members to support the cast in the filming and received hands-on experience working alongside industry professionals. It was a busy four days and by the end everyone was exhausted, but exhilarated! We spent May editing the songs and getting the show ready for audiences. This once in a lifetime opportunity allowed our students to experience life on a movie set and proved that St. A's will find a way for the arts to thrive no matter the circumstance!